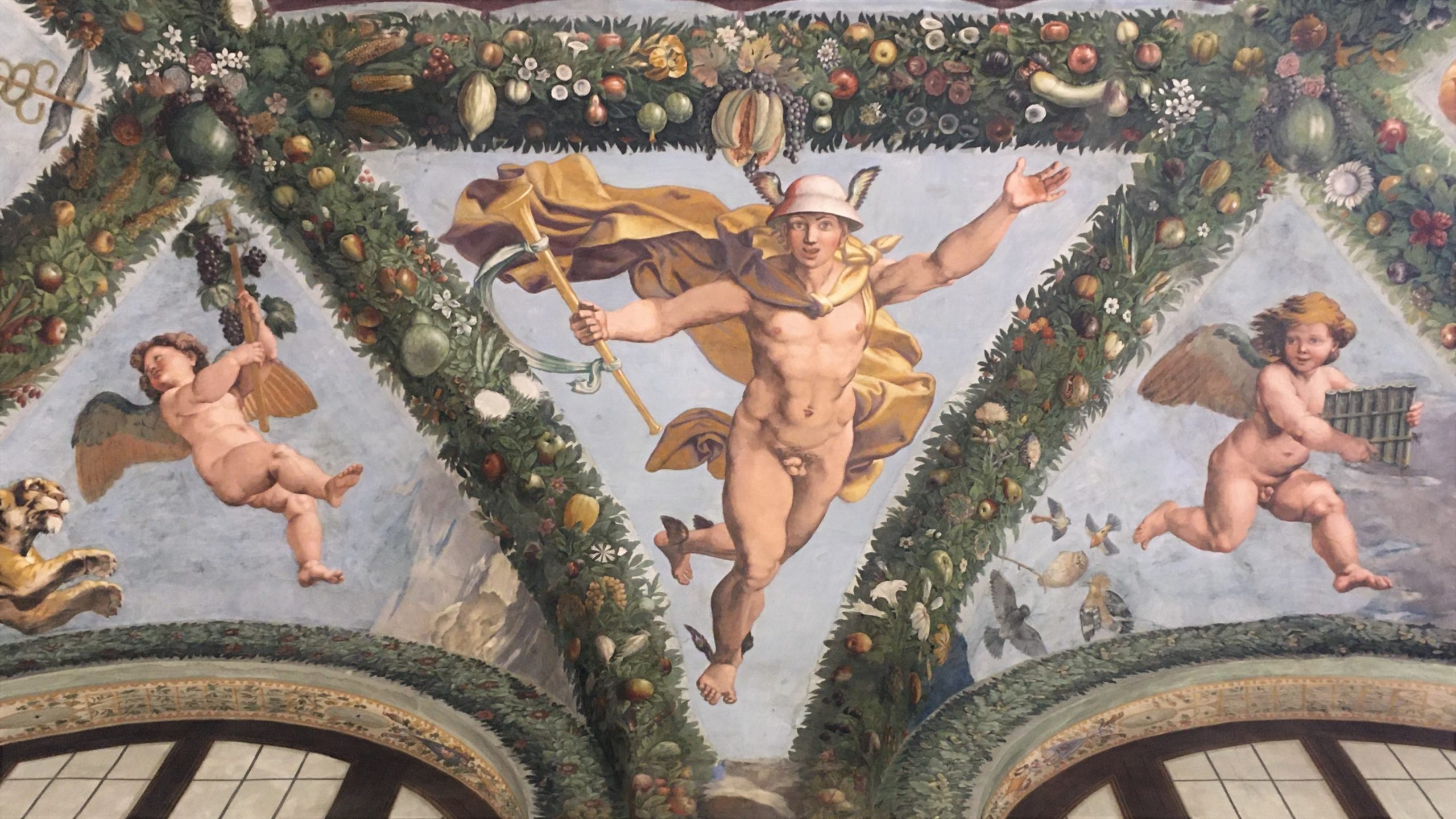 Villa Farnesina reopens its doors to the public with a splendid exhibition dedicated to Raphael’s frescoes.

The exhibition offers a new perspective on the work of the Divin Pittore, retracing the history of the “Triumph of Galatea” and the “Loggia of Cupid and Psyche” in the light of recent studies conducted on the two works.

The exhibition – titled “Raphael in Villa Farnesina. Galatea e Psyche” – will be open until January 6, 2021.

Raphael frescoes Exhibition at Villa Farnesina is part of a series of events scheduled in Rome to celebrate the 500th anniversary of the death of the “Divin Pittore“.

This event too – like the beautiful Mostra Raffaello 1520 – 1483 at the Scuderie del Quirinale – has undergone severe limitations and changes due to the well-known events linked to Covid.

Thus, initially scheduled for spring, the exhibition at Villa Farnesina was inaugurated only a few days ago, with limited admissions.

The good news is that, on the occasion of the exhibition, the Villa will be open to the public every day and with longer hours (normally it can be visited only on Saturdays and in very limited time slots).

Furthermore, visitors will be able to take advantage of an impressive information apparatus to fully appreciate Raphael frescoes in the light of recent studies. 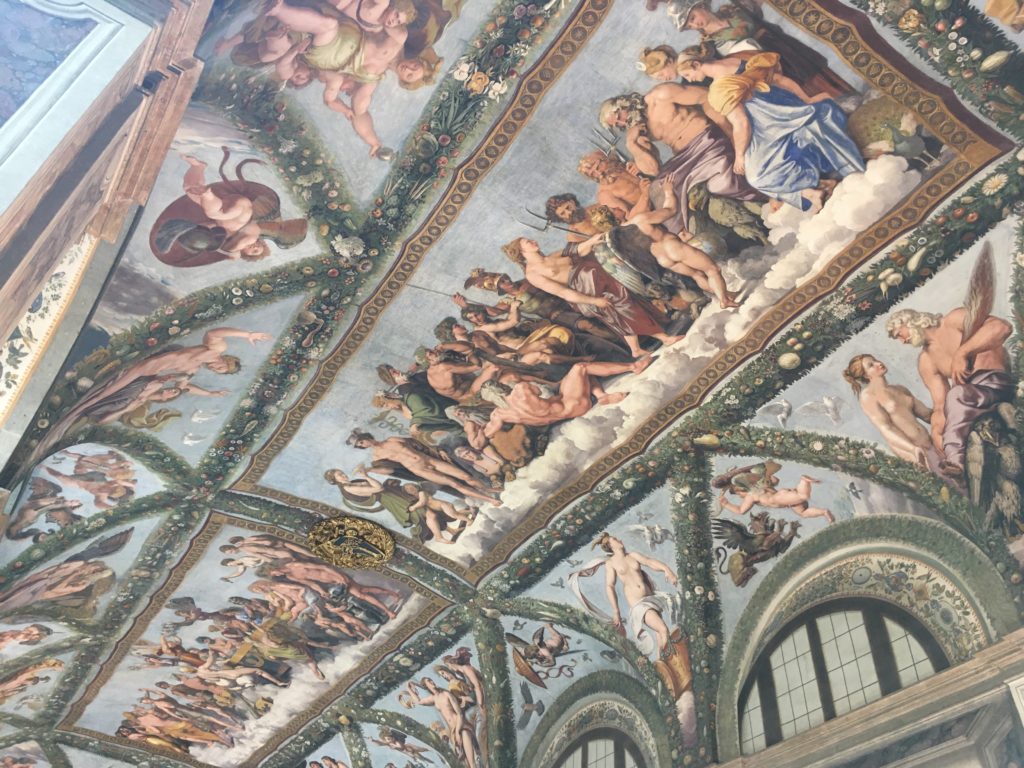 Raphael frescoes exhibition, curated by Antonio Sgamellotti and Virginia Lapenta, is set up in the splendid rooms of Villa Farnesina, one of the greatest Renaissance masterpieces in Rome.

The Villa was designed in the early 1500s by Baldassarre Peruzzi for Agostino Chigi – a Sienese rich banker and patron of the Arts – who wanted a place of peace on the banks of the Tiber.

In those years the center of gravity of the Italian Renaissance moved from Florence to Rome, where the greatest artists of the time converged, attracted by the papal court and the local aristocracy.

In addition to Peruzzi, a great architect and painter, we think of Bramante, Michelangelo and Raphael himself.

It was to the genius of Urbino that Popes Julius II and Leo X entrusted important tasks related to the new St. Peter’s Basilica and the decoration of the Vatican Rooms.

Extremely committed to these projects, in the twelve years spent in Rome, Raphael paid little attention to private commissions, mainly delegated to the artists in his workshop.

The Divine Painter, however, reserved more attention to Agostino Chigi, to whom he was linked by a relationship of esteem and friendship, as well as by the deep love for classical art, to which Villa Farnesina is inspired. 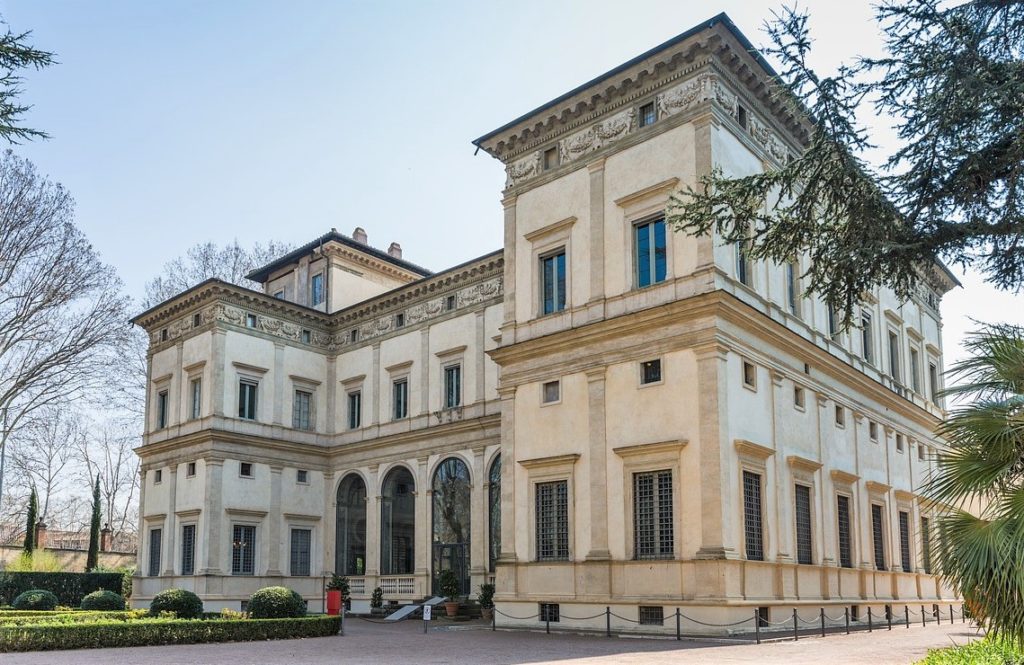 The main facade of Villa Farnesina has two side outposts that embrace the central body of the structure, where – on the ground floor – there is the precious Loggia of Cupid and Psyche (photo: Anna Pakutina / Shutterstock)

The main pictorial cycles of the Villa are inspired by classical myths and Raphael’s intervention fits perfectly into this project with the creation of two absolute masterpieces: the Triumph of Galatea and the Loggia of Cupid and Psyche.

The Triumph of Galatea is located on the ground floor of Villa Farnesina, in the loggia adjacent to the entrance to the exhibition.

The work is positioned under a lunette by Sebastiano del Piombo and next to the Polyphemus by the same artist. The architectural scheme of the room and the frescoes on the ceiling are the work of Baldassarre Peruzzi.

In the initial project, the walls of the loggia were to be decorated with other scenes from the story of the nymph, never completed. For this reason the two existing frescoes do not depict the main events of his story, but only the apotheosis of the nymph under the helpless gaze of the lover Polyphemus, who observes from the adjacent fresco.

Galatea rides a shell-shaped chariot pulled by two dolphins and led by Palaemon.

The scene is animated by a festive procession of marine gods and three cupids in the act of throwing love darts towards the nymph. A fourth putto – to whom the nymph’s chaste gaze is turned – holds a bundle of arrows hidden behind a cloud, symbolizing the chastity of Platonic love.

The careful re-examination of the fresco has allowed scholars to understand the techniques and timing of the intervention of Raphael and his team. Furthermore, among the materials used, a pigment – known as “Egyptian blue” – emerged which was believed to have disappeared with the decline of Graeco-Roman culture (of which the Divin Pittore knew the secret recipe!). 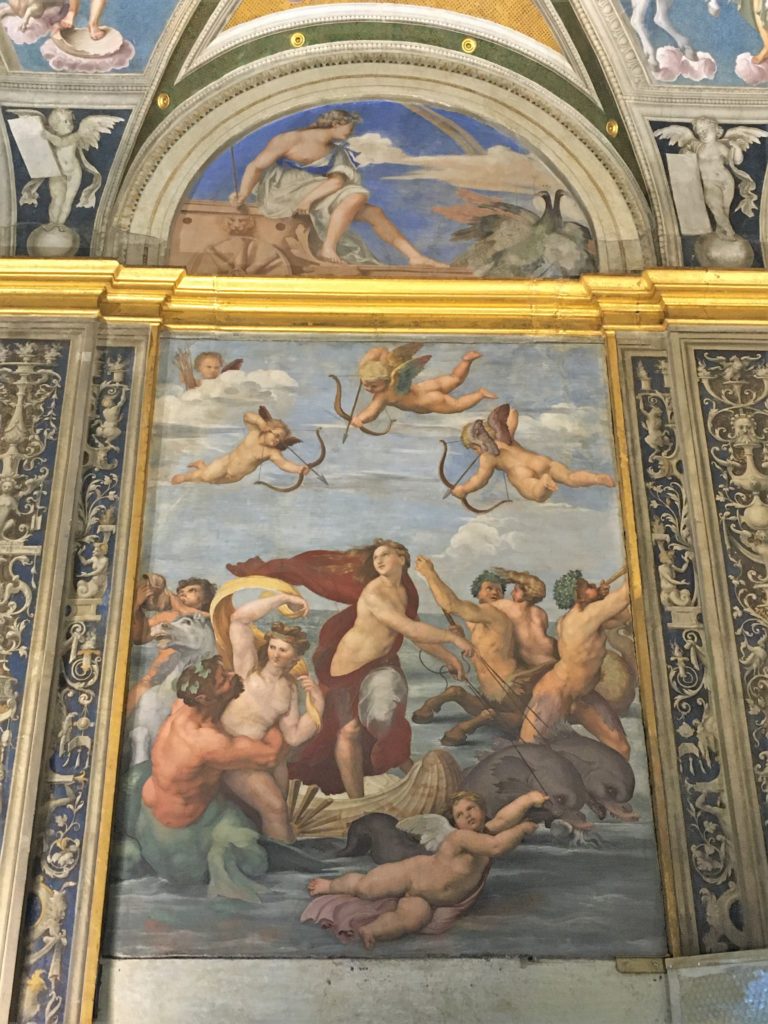 In the twist of Galatea’s body, Raphael’s work is influenced by the style of his “rival” Michelangelo

Raphael’s other great work at Villa Farnesina is the Loggia of Cupid and Psyche, which at the time represented the main entrance to Agostino Chigi’s home. From the luxuriant garden the villa was accessed via a wide staircase, which has largely disappeared.

On the occasion of his marriage to Francesca Ordeaschi, Chigi asked his friend Raffaello to decorate the loggia where he intended to host the wedding banquet, in the presence of the highest aristocracy of the time.

The room had to be sumptuous and unique, and Raphael devised a solution that would further expand the environment by connecting it visually to the garden in front. The result is obtained with an intertwining of wonderful festoons that create a perfect osmosis between the inside and the outside of the Villa, and – at the same time – elegantly frame the scenes of the pictorial cycle inspired by the myth of Psyche. 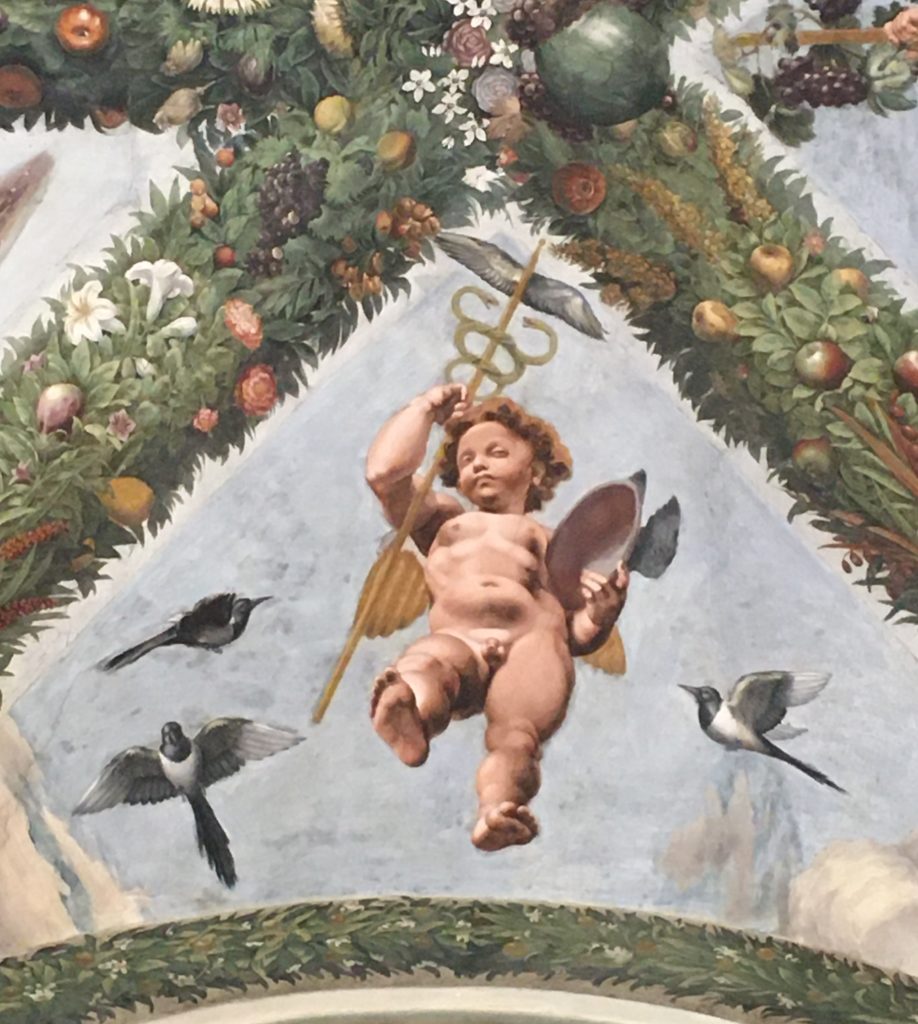 The cycle is divided into two large central stories that simulate stretched tapestries, ten pendentives at the pillars and fourteen sails above the arches.

The myth – taken from Apuleius’s Metamorphoses – tells of the mortal and beautiful Psyche who becomes the bride of Love without however knowing the divine nature of her husband, who appears to her only in the darkness of the night.

Having discovered her identity, before being able to rejoin her divine consort, Psyche is forced to undertake a series of tests, at the end of which she will obtain immortality.

The happy ending of the story is represented on the ceiling of the loggia.

On the right is “The Council of the Gods“, gathered to decide whether or not to welcome Psyche among them. 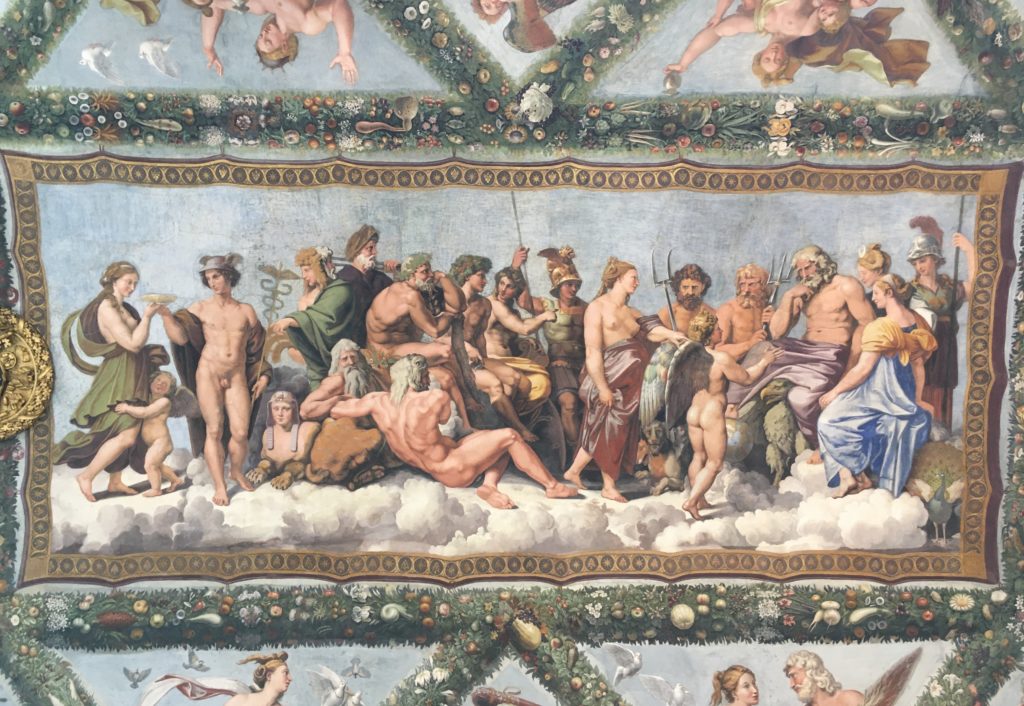 Jupiter, attentive and thoughtful, presides over the Council in which the fate of Psyche will be decided

All the gods of Olympus (and some Heroes) attend the Council, centered on the figure of Jupiter on the right. On the opposite side Psyche closes the sequence while finally receiving the cup with the nectar of immortality from Mercury.

On the left is the large “Wedding Banquet“, which seals the eternal love between Psyche and Eros. 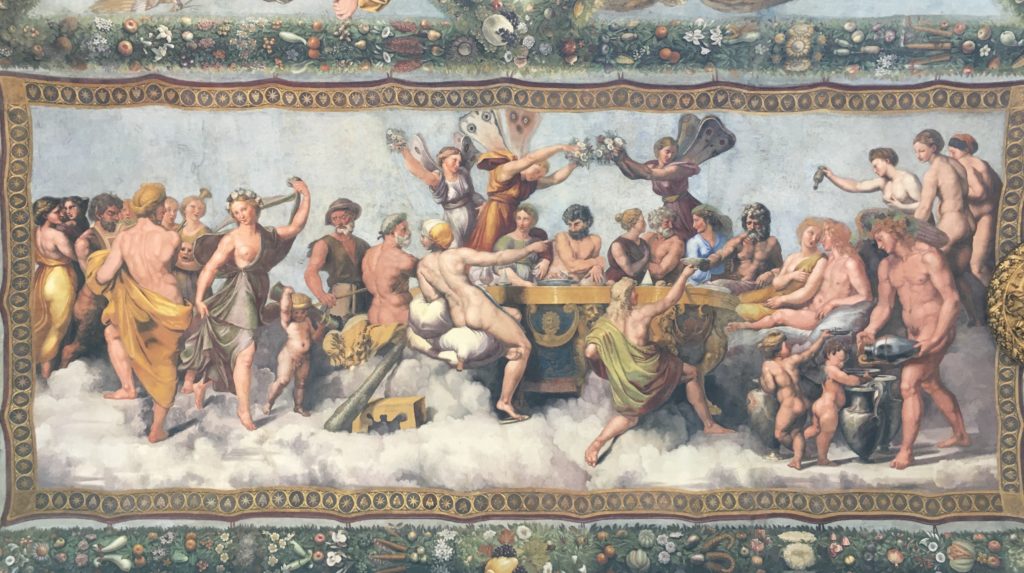 The two spouses exchange loving glances, surrounded by all the Gods, in an idyllic and well-wishing scene for the marriage between Agostino Chigi and his beloved.

For the more curious, on the occasion of the exhibition at Villa Farnesina a digital reconstruction of the loggia was created, which allows you to appreciate the most minute details of the masterpiece that Raphael created together with his best collaborators (first of all Giulio Romano, Giovanni da Udine and Giovan Francesco Penni).

“For you who come here, what seems ugly to me is beautiful: if you like it, stay, if you don’t like it, go away; anyway, thank you” – so says a Latin inscription in the garden of Villa Farnesina.

We leave you on this sentence, inviting you to visit the Raphael frescoes exhibition soon.

One last note: in addition to the current exhibition, Villa Farnesina was also supposed to host a second exhibition linked to the celebrations for the five hundredth anniversary of Raphael’s death: “Raffaello e l’Antico nella Villa di Agostino Chigi“. Due to logistical issues related to the Covid emergency, the exhibition was postponed to Spring 2021.

We will keep you updated as always; in the meantime we advise you to contact us if you want to plan a private visit of the current exhibition, with our specialized guides on Raphael’s work! 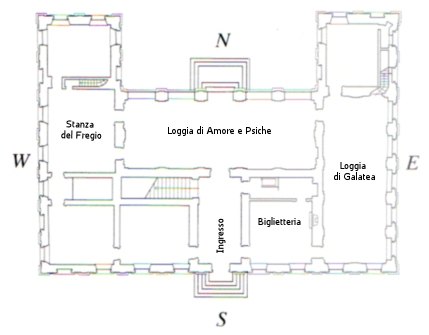 Gladiator School in Rome & Colosseum: a special Tour with Laura and Family

Laura is a professional blogger and took a chance this…

How much does it cost to visit Vatican Museum & Sistine Chapel on a guided tour?

Are you planning to visit Rome with a guided tour…