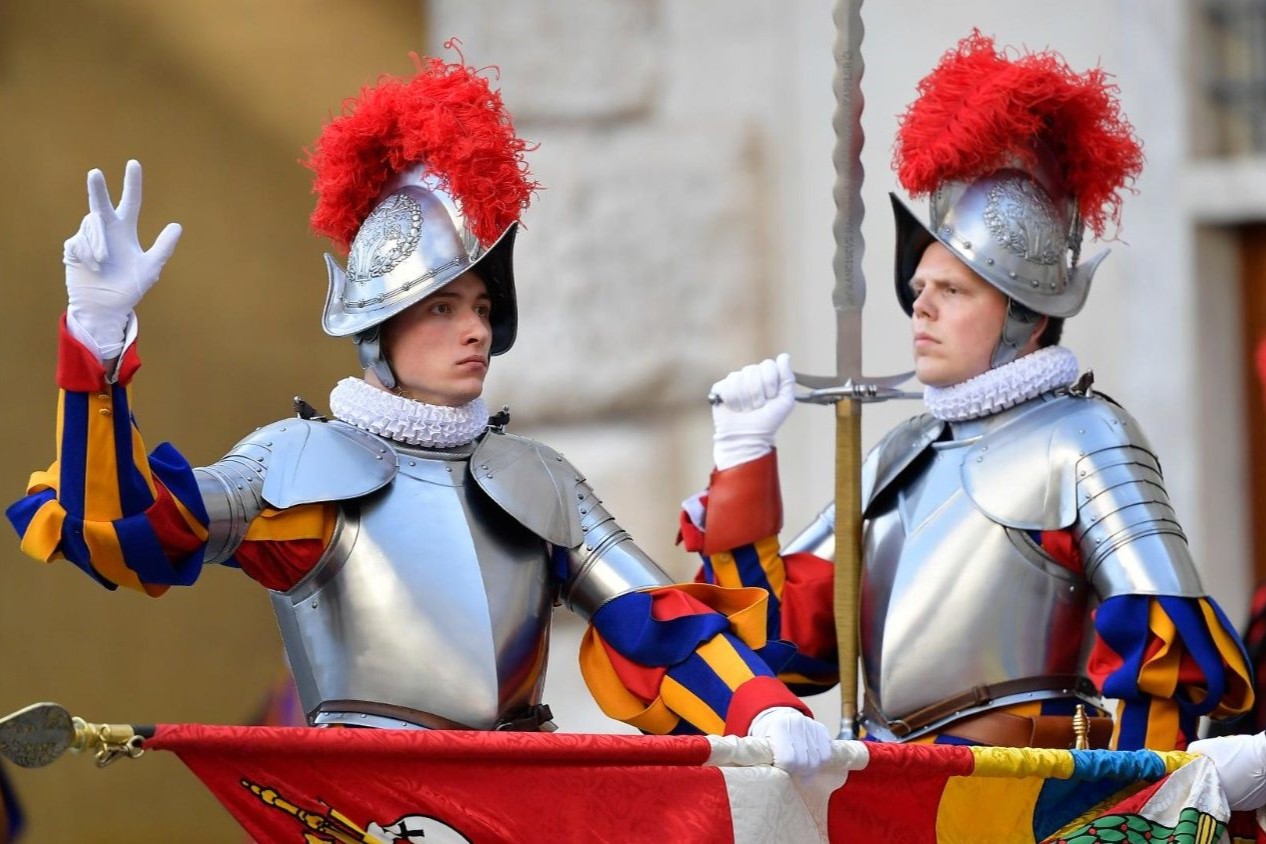 Among the top Rome family tours, St. Peter’s Basilica and the Vatican City cannot miss out in your itinerary. If you have decided to take a walk in Rome with your children, you will certainly have marked these stops: choose to reach the Basilica by walking along Via di Sant’Anna and pass by Porta di Sant’Anna (St. Anne’s Gate). Here your kids can bump into and greet the Swiss guards, who are in charge of the security of the Vatican State and City, where the Pope lives. If you’re wondering why state: yes, you’re right, inside the Italian capital there is an independent state, the smallest in the world!

| Keep reading: Things to do in Rome with kids: 5 child-friendly tips to visit the Vatican |

These guards are different from all the others, they are really special: they’re not policemen, but they are Pontifical Swiss Guards, i.e. Swiss soldiers responsible for the Pope’s safety. They wear bright colors as uniform!

On your family tours to the Vatican City, you’ll probably want to know more about them. So let’s get to know the Swiss Guards a little better so that we can answer all the questions that children are sure to ask when they see them! Discover 5 fun facts about Vatican’s Swiss Guards. 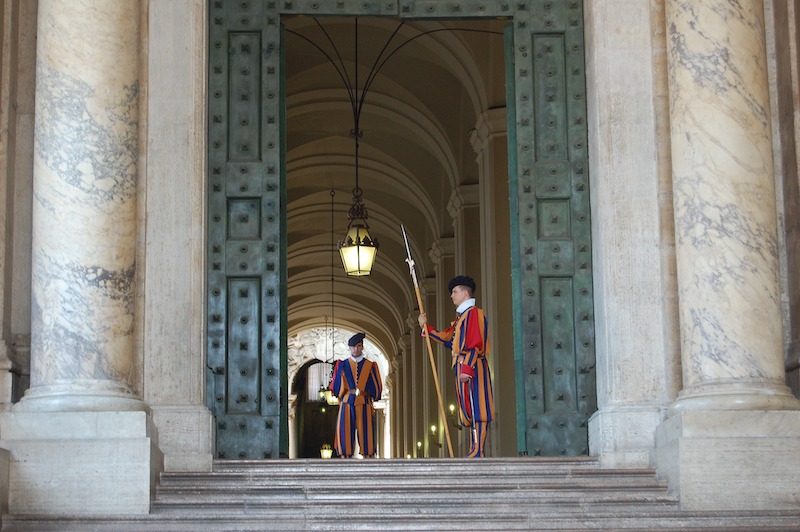 Their corps was born in 1506 when Pope Julius II called the Swiss soldiers to defend him. Swiss soldiers were known for their loyalty. For this reason, in 1512 they were awarded the title of “defenders of the freedom of the Church”. They had no horses or special weapons: they knew how to defend themselves by advancing like a human wall. The first Swiss soldiers to leave Switzerland were mercenaries: they were attracted by the high pay, and they considered the job as a summer occupation. In winter, in fact, they could return home with a little wealth.

Currently, there are 110 guards who are in charge of the Pope’s safety and his “house” (the Vatican City). Their corps is made up of young Swiss citizens, who have successfully served in the Swiss Army. They have to be at least 5 feet 7 inches tall and can’t be married. And of course, the essential requirement to become a Swiss Papal Guard is also to be a Catholic believer.

2-How does one join the corps?

Recruitment is long and strict. It lasts 5 weeks, during which they learn some notions of the Italian language, the salute to the flag, marching and how to hold the halberd. Since the main task is protection, the future Swiss Guard also learns defense techniques.

The new recruits are sworn in on May 6 in commemoration of the Sack of Rome in 1527. On that date, 147 Swiss Guards gave their lives to save Pope Clement VII. Only those who escorted the Pope through the Passetto di Borgo (an elevated passage about 800 meters long that connects the Vatican and Castel Sant’Angelo) could save their lives.

3-Why do they have to wear this colorful uniform?

The traditional uniform of the Swiss Guards dates back to the Renaissance and has remained unchanged ever since. All uniforms are tailor-made in the barracks’ in-house tailor shop.

The most famous uniform is the colorful one with the typical blue, yellow and red stripes on jacket and pants, which a legend says was designed by Michelangelo (but it is not true!). The blue and yellow colors are related to the coat of arms of Pope Julius II’s family (founder of the Swiss Guard). Look carefully also at the hat they wear: it marks the rank of the soldier wearing it! During our Rome family tours in winter you can see them wearing a long coat over this flamboyant uniform!

4-Where do they live?

The Swiss Guards live at the eastern edge of the city, north of St. Peter’s Square and beside the Vatican palace. The Campo Santo Teutonico, near St. Peter’s Basilica, is designated their cemetery: for 12 centuries now, a German and Swiss estate has been preserved here next to the Vatican.

The officers advise the young men to maintain a “discreet” attitude when they leave the Vatican walls, not to be too conspicuous (on liberty, however, they do not wear their uniforms). Everybody has to return to their barracks by midnight!

Every day, two-thirds of the personnel are engaged in guarding the entrances to the Apostolic Palace and the Pope’s private apartment.

They also guard the external entrances: it’s here the best spot to see them on your Rome family tours. Defending the entrances to Vatican City (look for them at the Arch of the Bells, at the entrance to the Holy Office and at the entrance to St. Anne’s), the Guards protect high representatives of the Church, during certain Masses, on the Pope’s trips and during his most important meetings.

With only 110 men, the Pontifical Swiss Guard Corps is the smallest army in the world. But it is also the oldest, having watched over the Pope’s safety for half a millennium!

Are you eager to plan unforgettable Rome family tours? St. Peter’s Basilica and the Vatican are must-see sights! And here your children can watch the Swiss Guards at work 🙂

Rome is a city that is rich in history, culture…

How to safely travel to Rome with children during Covid-19

Are you tirelessly surfing the web to better understand how…

The Appian Way Regional Park (Appia Antica) is one of…