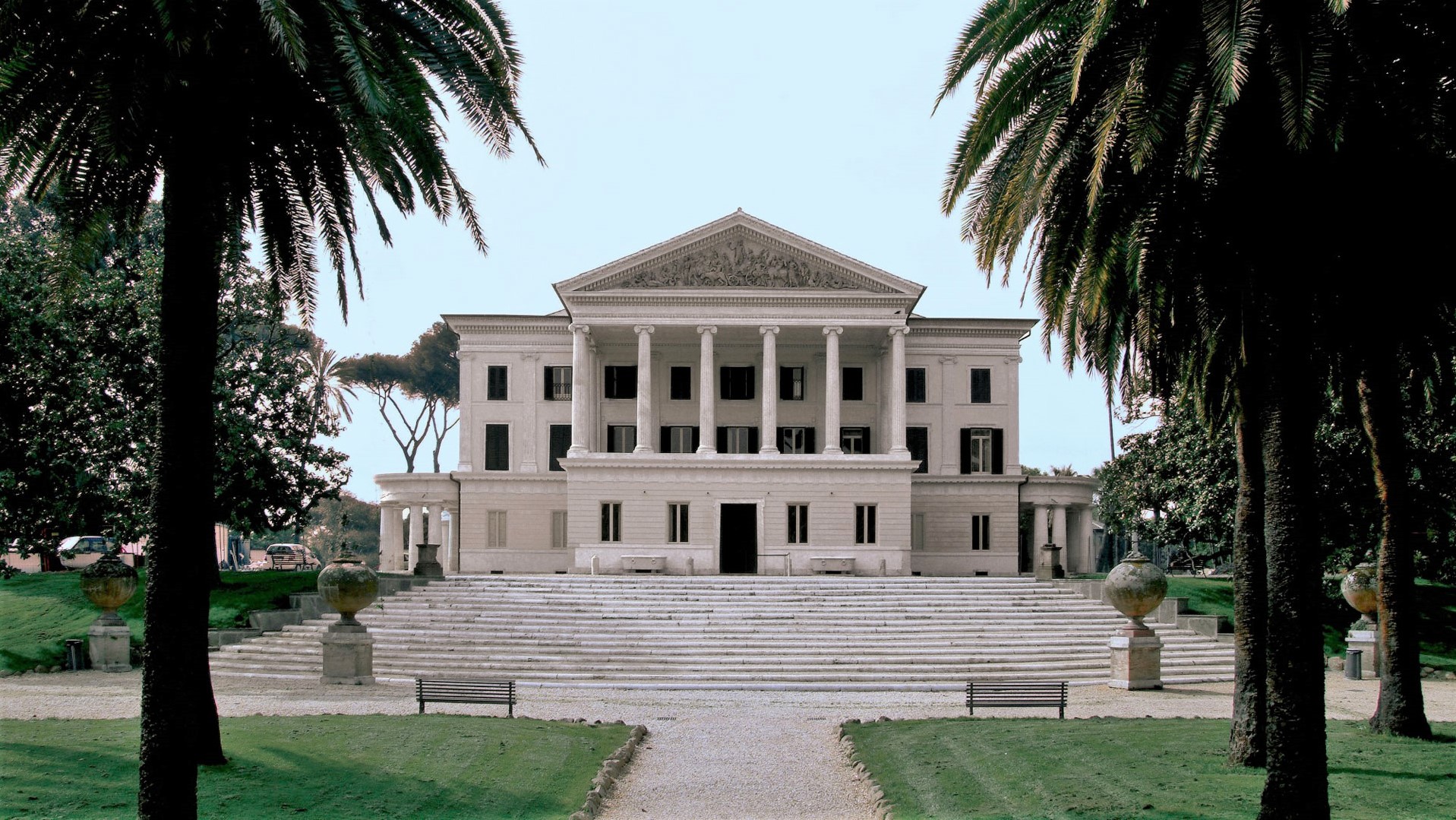 Villa Torlonia Park is among the smallest green areas in Rome. With only 13 hectares of extension, however, it has characters of great originality.

Its landscape aspect blends perfectly with the elegance of its Neoclassical architecture.

Villa Torlonia: from the birth of the Park to the purchase of the Torlonia family

In the XVIIth century, in this suburban area of ​​Rome there was a small property of Cardinal Pamphilj known as “La Vignola“.

The property subsequently passed into the hands of the Colonna family, who enlarged it by purchasing the neighboring land.

It will be at the end of the eighteenth century that Villa Torlonia will find its final owners; those who will leave an indelible mark on the park. We speak of course of the Torlonia family.

In particular, it was Giovanni – Marino’s son – who bought the villa in 1797, and then entrusted its arrangement to one of the greatest architects of the time: Giuseppe Valadier.

Giovanni Torlonia was a particularly prominent personality in the Roman nobility, thanks to the fame that his Bank had acquired in the city. For the same reason he had also managed to attract the admiration of the papacy.

Besides being a rich business man, Prince Giovanni Torlonia distinguished himself as a refined patron of the arts and art collector.

Among his major acquisitions, we remember the collection of Bartolomeo Cavaceppi – a famous sculptor and restorer of the time – which included paintings, drawings and marbles of the highest value. (Some of these works are visible in the Torlonia Marbles Exhibition hosted at the new headquarters of the Capitoline Museums in Villa Caffarelli)

On behalf of Giovanni Torlonia, Valadier gave a unique imprint to the Villa Torlonia Park, which took on the appearance of an Italian garden characterized by straight avenues, regular and geometric flower beds, and elegant fountains at the intersections of the main avenues.

A line of holm oaks visually led the visitor to this Neoclassical masterpiece, the central fulcrum of the northern sector of Villa Torlonia Park.

From father to son: the role of Prince Alessandro Torlonia

Villa Torlonia changed its appearance when Giovanni was succeeded by his son Alessandro, who called to his service a refined architect of the time: Giovan Battista Caretti.

Thus the Temple of Saturn, the Amphitheater (now lost), the Tribune with Fountain, and many other architectural elements took shape in this period.

During a stay in London, Alessandro Torlonia had the opportunity to visit Lord Hamilton’s Painshill Park designed by William Kent near London. The prince was particularly impressed by this type of garden – precisely called “English” – where nature apparently expressed itself free and without constraints.

Giuseppe Jappelli, talented landscape architect from northern Italy, was then commissioned to enrich Villa Torlonia Park with artificial hills, winding paths and lakes. One of these reproduced the Fucino Lake on a smaller scale, to remember and enhance the titanic work carried out by Prince Alessandro for the draining of that immense reservoir.

There is an interesting curiosity regarding the relationship between architect Jappelli and his client. From the sources of the time, we know how intolerant Jappelli was to the climate that reigned around the Torlonia family, and in general to the Roman aristocracy of the time.

Infact Roman nobles were accused by the architect of superficiality and arrogance. According to him, they always confined themselves to strolling in carriages, surrounded by crews of flatterers in the splendor of their villas. They were so different from the English nobles that Jappelli had met on his travels to England; much more reserved and lovers of lonely walks in the greenery of their sober gardens.

Despite the non-idyllic relations with Alessandro, the architect nevertheless finished his work and gave Villa Torlonia Park a touch of internationality and eclecticism that still survives the time. In fact, he built the Swiss Hut (which later became Casina delle Civette), the Serra, the Moorish Tower and the Campo da Tornei.

Villa Torlonia Park: from Mussolini to the present day

With the expansion of Via Nomentana in the early 1900s, the northern part of ​​Villa Torlonia Park underwent deep changes. The entrance was set back due to the widening of the road and the Amphitheater and other false ruins were eliminated.

A few years later, Prince Giovanni rented Villa Torlonia to Benito Mussolini, who chose it as his residence from 1929 to 1943. The creation of the so-called war gardens dates back to the war period. It was an agricultural conversion project of the land of some Roman villas in order to make up for the food shortages of the time.

At the end of the World War 2, Villa Torlonia was occupied by Anglo-American troops, who made it one of their headquarters in Rome, as well as a “parking” for tanks, causing extensive damage to the park and its buildings.

After years of neglect, in the 70s the villa was finally acquired by the Municipality of Rome, thanks to a strong mobilization of the neighborhood committees, which showed great interest and active participation in the recovery of Villa Torlonia Park.

The buildings of Villa Torlonia, however, remained in decay for another twenty years, because the recovery projects were only started in the 1990s. The last intervention in chronological order is the one that concerned the Theater, which thanks to a recent restoration has finally returned to its original splendor.

Villa Torlonia appears to us today as one of the most important examples of a nineteenth-century villa, characterized by an unusual mix of styles.

This eclecticism is also reflected in the geography of the park. The northern part, in fact, is marked by rationality and order (in typical Neoclassical style); while the southern area is intriguing for its irregularity. You are immersed in an “artificially uncontrolled” nature, which reflects the ideals of Romanticism. The architectures of different styles appear from the thick vegetation, arousing an effect of continuous surprise and suspense.

The Vatican City is simultaneously the smallest nation on planet…

How to plan the Best Walking Tour in Rome

Innovative technologies, apps and devices have drastically altered the way…

5 Local Rome Tips and Where to Find Them

With years of experience in organizing local tours in Rome…