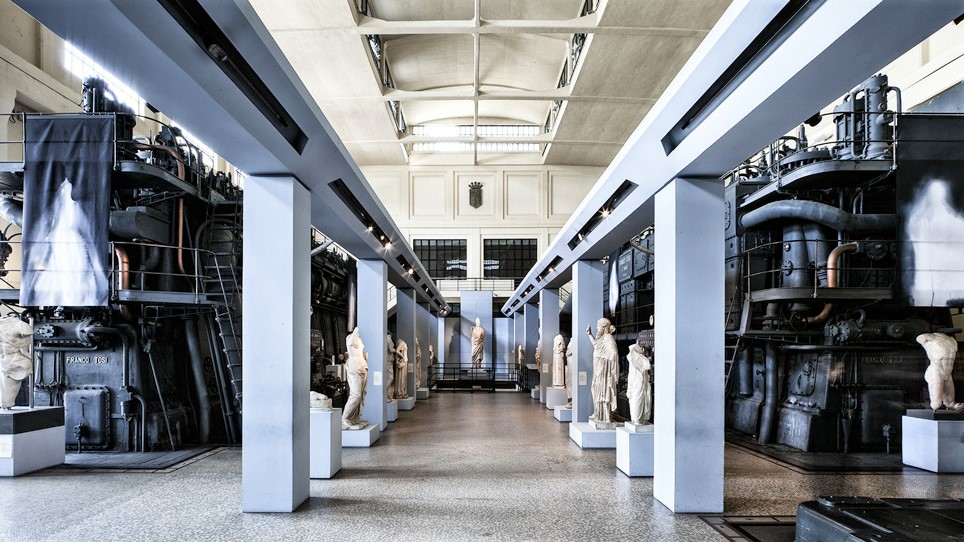 Beyond a anonymous gate on Via Ostiense, not far from Garbatella metro station is one of the most unusual and little known museums in Rome: the Centrale Montemartini Museum.

Once inside you’ll find a beautiful Art Nouveau facade and cast iron street lamps that hide a secret message. If you look at them carefully you can see some little women dancing with very long and “electrified” hair. The building in front of these lampposts was in fact the first thermoelectric plant in Rome inaugurated in 1912! 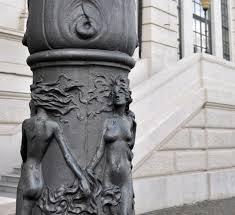 The Montemartini power plant was abandoned in the 1960s and after a long period of neglect it was chosen in 1997 as the site for an unusual exhibition entitled “The Machines and the Gods“. This experiment was so happy and successful that it was decided to transform the exhibition into a permanent exhibition and a real museum.

The Centrale thus became a seat of the Capitoline Museums, flanking the historic headquarters in Piazza del Campidoglio (and the new headquarters of Villa Caffarelli – also on the Campidoglio – recently inaugurated on the occasion of the splendid Torlonia Marbles Exhibition) 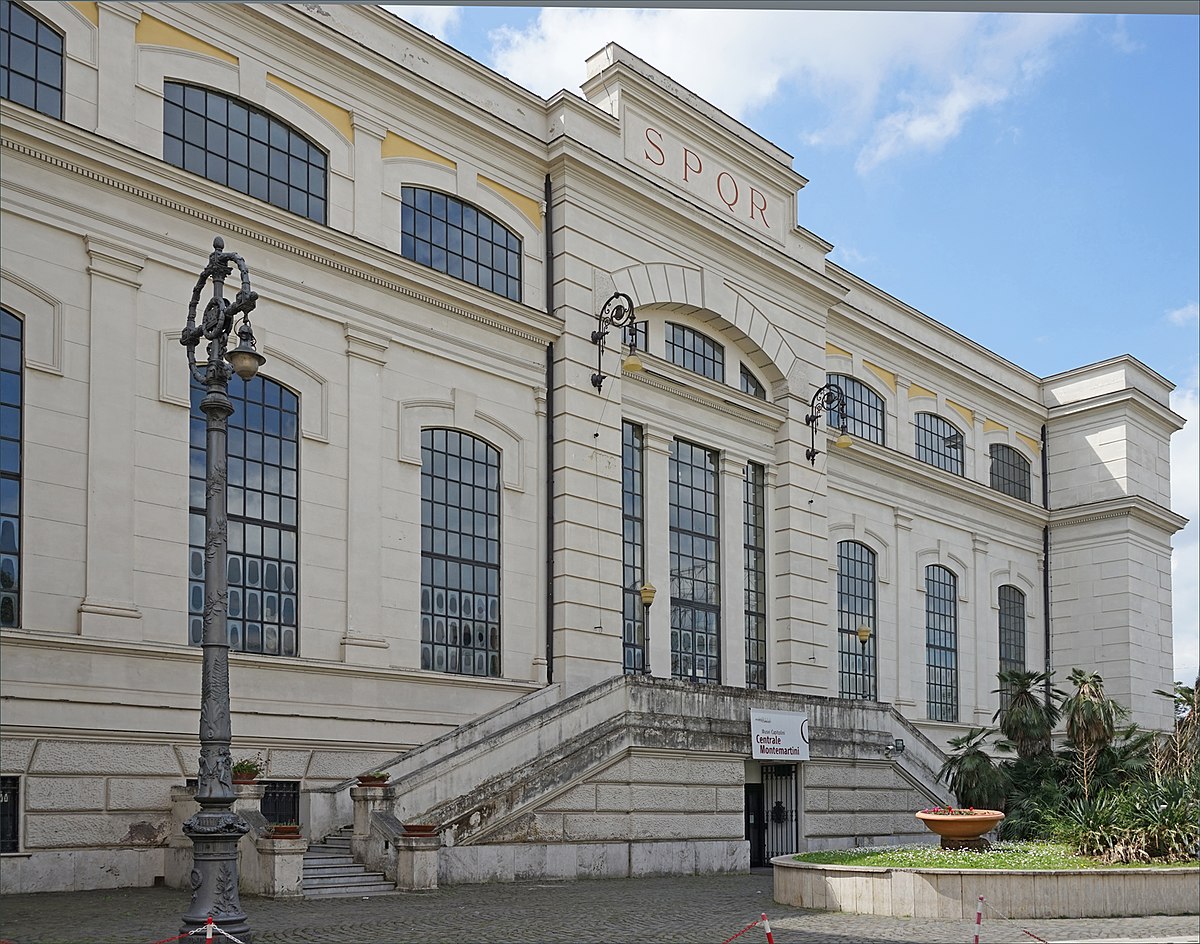 The elegant front facade of the Centrale Montemartini on Via Ostiense

Centrale Montemartini Museum, Sala Colonne: from the dark of the tombs to the white of the republican portraits

The industrial past of the building that houses the Museo della Centrale Montemartini is evident already on the ground floor.

Here, between imposing pillars, the hoppers can be seen on the ceiling, a sort of large funnels used to eliminate the waste material coming from the machine room above where the coal was burned.

On the right in a display case there is a great testimony of the primitive Roman funerary painting.

In a fragment of the fresco we see several men engaged in military affairs. The painting was found in the tomb of the Fabii, near the current Piazza Vittorio.

It is exciting to think that we have before our eyes a work dating back to the third century BC handed down in a truly exceptional state. On the other hand, the simple and naive rendering of the bodies together with the two-dimensional vision of space confirm the era of its creation.

A little further on we see a toga man who proudly shows us two heads in his hands! 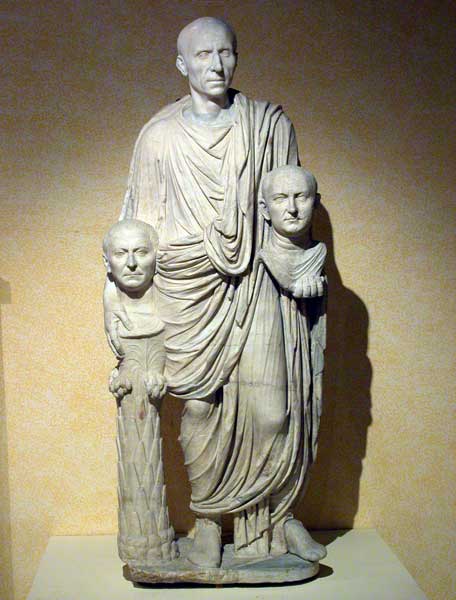 This is the famous Togato Barberini, an unusual statue that underlines the importance for the Romans of the portrait and the affirmation of their family. It is a sort of marble Roman family tree and -at the same time- one of the most precious works of the Centrale Montemartini.

Interesting curiosity: according to the Ius Imaginum, the Romans even had to keep wax masks of their ancestors in their homes, to be worn on special occasions.

Centrale Montemartini, Sala Macchine: the contrast between the modern and the ancient

The room where the contrast between industrial and classical archeology emerges most strongly is the Sala Macchine (Machine Room), located on the first floor of the Centrale Montemartini.

The imposing diesel engines of the Tosi company are the setting for a series of classical marble statues arranged like columns in the nave of a church. This combination of the dark color of the machinery and the whiteness of the marbles is precisely the strong point of this museum.

Our attention, however, is captured by an unusual statue that stands out among others for the glitter of the its material. It is the statue of Agrippina, carved with an Egyptian stone, basanite, a dark material with greenish fluorescence that is extremely rare in our city. 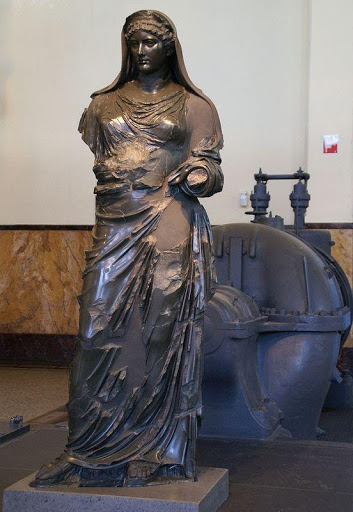 Precious statue of Agrippina exhibited in the Sala Macchine

The statue was found near the temple of her husband Claudio, on top of the Caelian Hill. The pose of the woman takes up the iconography of the person praying. Rather funny given that according to the sources it was this woman who killed her husband Claudio by offering him succulent poisoned mushrooms! What better way to secure the throne for his son Nero…

Looking away from this enigmatic woman, a group of original Greek works appears in front of us, set up to reproduce a pediment of a temple. Originally they were located on the top of the Temple of Apollo Sosiano which stood next to the Theater of Marcellus. 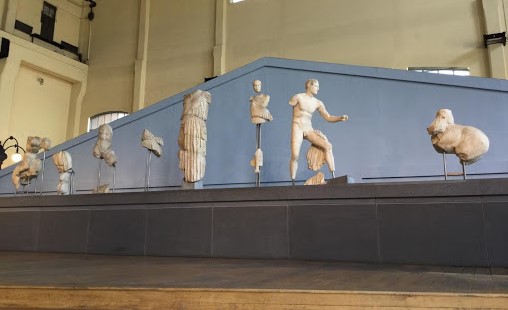 According to tradition the consul Caio Sosio had brought them to Rome to ingratiate himself with the Emperor Augustus after he had been a supporter of Marc Antony for a long time. After the latter’s death, the consul had looked for a way to return to the emperor’s favor.

If you approach these precious statues of the Centrale Montemartini, you can see the body of Athena wrapped in a dress with a thousand folds, and next to her another female figure who still has traces of color on her head.

In fact, we know that originally these white statues were polychrome, painted with very bright and gaudy colors. What we have in front of our eyes is an Amazonomachy, a battle between Greeks and Amazons!

To our left we cannot fail to notice a colossal head staring at us.

Found in the 20s of the last century in Largo di Torre Argentina, the statue represents a minor deity of the Roman pantheon: the Fortuna of the present day.

This colossal statue of which only the head and one arm survive, stood in the center of a circular temple of which only a few parts remain today. If you look closely at the ears we also see the holes in the lobes for probable earrings!

It was an acrolith, a statue made of different materials (marble for the exposed parts and a bronze-covered frame for the bust). A cornucopia, a symbol of wealth and prosperity, seems to have been found in the hollow of the mighty surviving arm.

Centrale Montemartini Museum’s last room welcomes us with a green setting, recalling the atmosphere of ancient Rome Horti. In fact, works found in various gardens and villas in Rome are exhibited here. These were mostly imperial possessions and this explains the very high quality level of the decorations.

On the floor we see an exceptional floor mosaic found near the church of Santa Bibiana, in what was the area of ​​the Horti Liciniani. The quality of the mosaic tiles is very high, as well as the care and detail with which hunting and animal capture scenes are rendered. 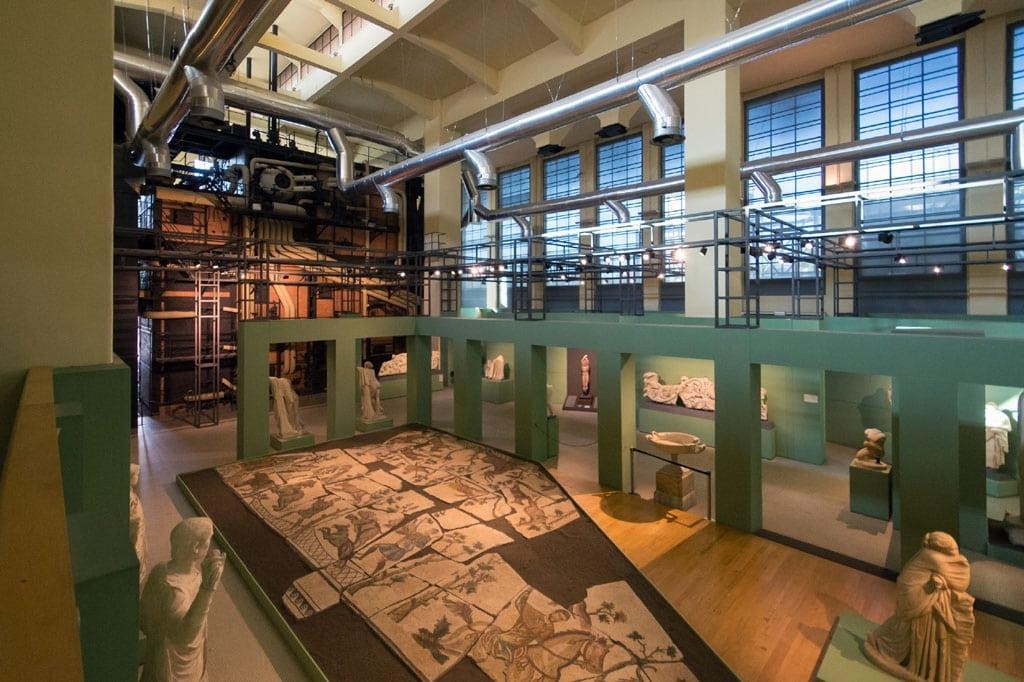 Sale Caldaie mosaic: one of the most precious pieces of Centrale Montemartini Museum

As we look up we see a young woman totally absorbed in her thoughts. It is wrapped in a cloak from which you can see the right hand while the left comes out surprisingly from the side. It is the Musa Polymnia, a Roman replica of ancient Greek statue. It is a hypnotic work, one of those statues that you would never want to look away from.

Indeed the Centrale Montemartini Museum has a unique charm and features a atmosphere almost out of time.

Unlike many other excessively crowded Roman museums, here silence reigns supreme. Walking through the rooms of this museum hearing your own footsteps and still smelling the oil from machinery is an experience to try at least once in a lifetime.

Contact us and I will be happy to personally take you on a guided tour of Centrale Montemartini Museum!

4 Reasons why the best Vatican Tours are private

From the Sistine Chapel to the Vatican Museums, there are…

Villa Torlonia Park and its Marvels

Villa Torlonia Park is among the smallest green areas in…

Walking tours for your family in Rome: all you need to know BEFORE booking

What do all the best walking tours of Rome have…