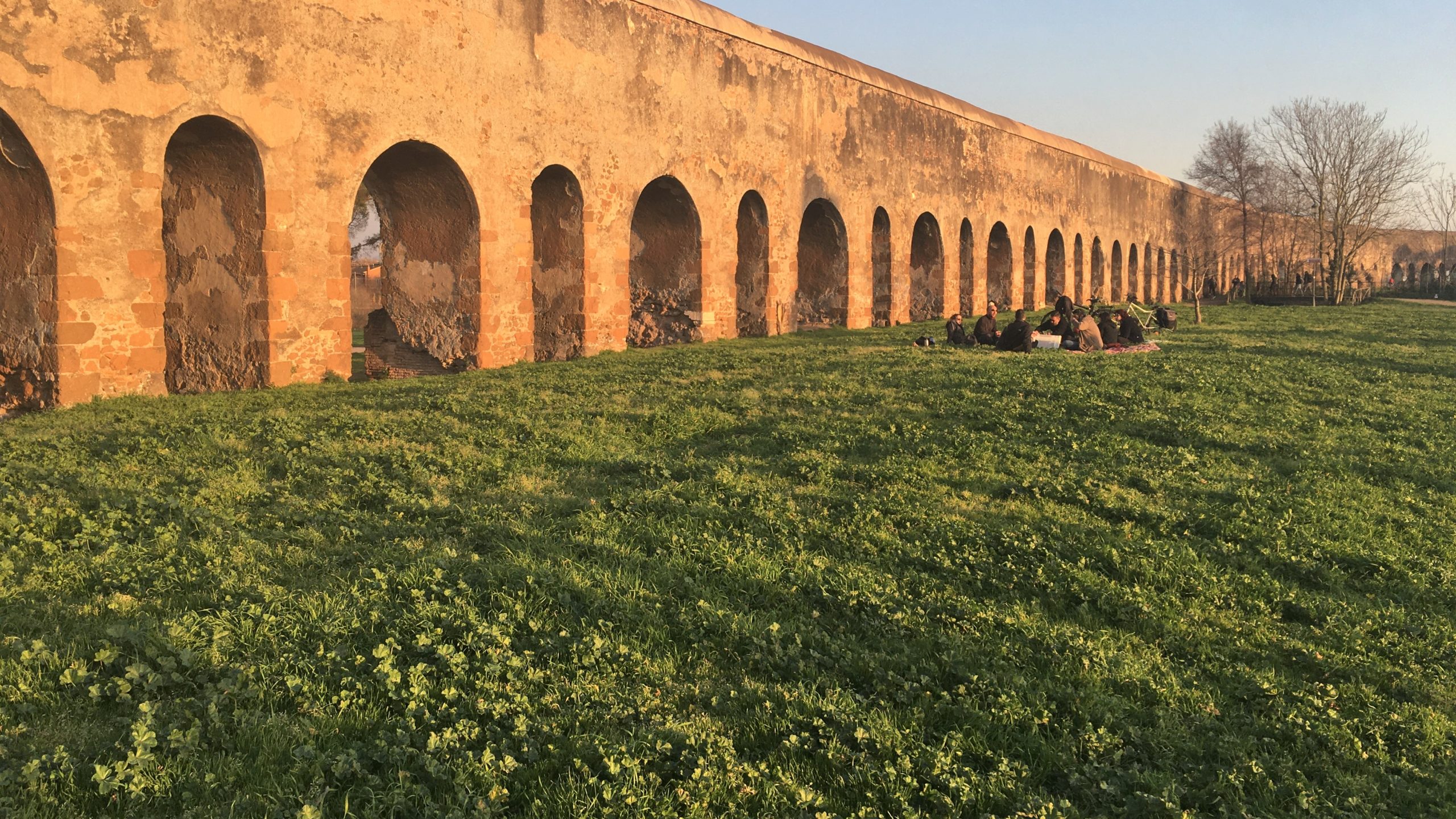 Are you wondering which things to do in Rome with kids? After having visited the Colosseum, admired the Vatican and all the amazing ancient landmarks of the Eternal City, you’d probably have some rest and take refuge away from the hustle and bustle where your kids can run wild outdoors.

Tor Fiscale Park is a haven of peace and nature, a few steps from Rome and the Roman countryside. It’s an enchanted place for a walk at sunset, a family lunch or a bike ride in the shadow of the ancient Aqueducts.

At Tor Fiscale Park there is something for everyone, both for kids and grown-ups. Let’s go and discover its history and secrets!

Set between Via Tuscolana and Via Appia Nuova, Tor Fiscale Park is one of the main stretches of Appian Way Regional Park.

Established in 1988 to safeguard the archaeological heritage, the Appian Way Regional Park also boasts the Aqueducts Park and Caffarella Park, covering an area of 4,500 hectares (!). In the following blog posts, we will discover all of its wonders!

Tor Fiscale Park is located east of the Caffarella Park and immediately north of the Aqueducts Park, to which it is connected by a pedestrian path.

Fiscale Tower as a garrison of the Roman countryside

Among the things to do in Rome with kids, you will be amazed at Tor Fiscale Park (or Park of Torre del Fiscale) for its impressive tower. The Fiscale Tower rises on the southern border of the Park.

But what was this tower used for? And why the strange name?

The Torre del Fiscale (better known as “Tor Fiscale”, because Romans always love to shorten names!) dates back to the 12th century, and it was built to control the possessions of a rich family of the time.

It was a common thing during the Middle Ages in Rome – and in the Papal State in general – to build these paramilitary fortifications.

The territory was not yet fully controlled by a central political authority, but rather divided into areas of influence of numerous “baronial” families, who exercised their power over the local population.

Over 30 meters high, the Tower allowed to control lands that extended for hundreds of hectares in the strategic area between Via Latina and Via Appia (Appian Way), as well as representing a prestigious status symbol for the family that owned it.

Over the centuries, the Tower passed from hand to hand among different families, until in the 1600s it was purchased by Filippo Foppi, a papal tax collector. Here is the mystery of the curious name of the Tower and the Park… “del Fiscale” (Fiscale in Italian is related to taxes and tax authorities!)

The Tower, built mainly in blocks of tufa, has been restored in recent years, but unfortunately it is still not accessible to the public.

The poetry of the ancient Aqueducts of Rome

The Fiscale Tower rises at the intersection of two of the most majestic aqueducts of ancient Rome: Aqua Marcia and Aqua Claudia.

Strolling here is definitely one of the most amazing things to do in Rome with kids: the Tower dominates the landscape, and it is surrounded by vineyards, vegetable gardens and wide meadows. In the background, you can see the profile of the Apennines. The overall effect is unique. 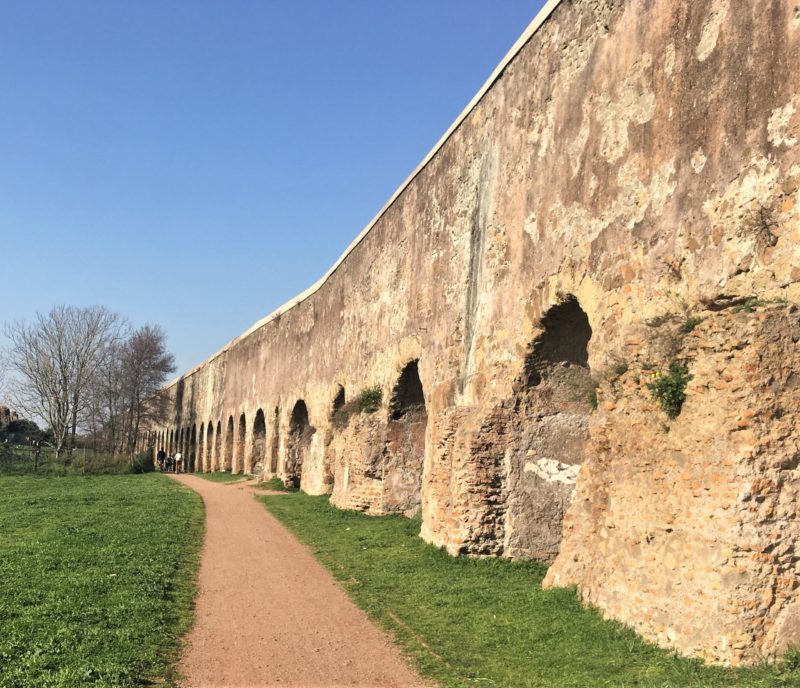 At the entrance of the Park you will be immediately transported into a dimension out of time, where the vestiges of the ancient Aqueducts run after each other in the Roman countryside, a few steps from the town.

The arches of the Aqua Marcia are also perfect as goal areas in soccer matches!

Especially in spring when the Park is teeming with life and colors.

Things to do in Rome with kids: Tor Fiscal practical advice

Let’s leave aside the history and poetry of Tor Fiscale Park and let’s focus now on some practical advice!

Right at the entrance of Via dell’Acquedotto Felice there is an Info Point and a Bike Rental Shop.

A short distance from the Indo Point there is the lovely restaurant Casale del Fiscale, where you can enjoy a spacious outdoor cafeteria and restaurant.

The cafeteria-restaurant of Casale del Fiscale keeps the architectural features of the typical farmhouse of the Roman countryside. 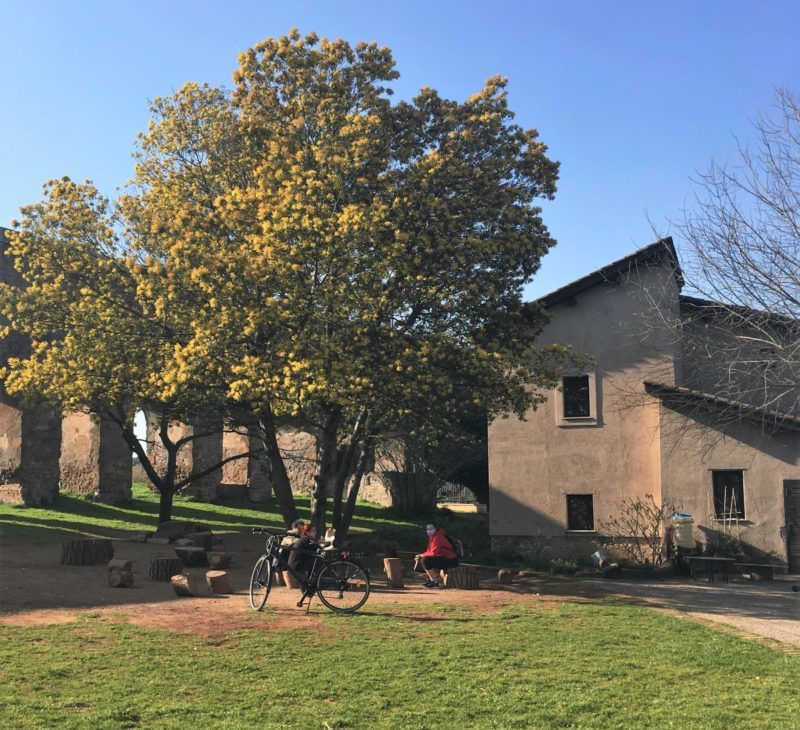 From here, you can start the paths that connect Tor Fiscale Park to the near Aqueducts Park; itineraries that can be pleasantly covered both on foot and by bicycle.

Do you prefer to plan an organized guided tour of Tor Fiscale Park? We will provide you with a 100% customized tour based on your dreams and expectations. Get ready to discover the wonders of a park that has no equal in the world!

CONNECTIONS: The area is well connected to the city center and can be easily reached by car or by subway (Metro A, Arco di Travertino or Porta Furba stops).

Family tours in Rome: 5 things you should know before booking for your kids

In a city home to hundreds of thousands of residents,…

Villa Torlonia Park and its Marvels

Villa Torlonia Park is among the smallest green areas in…

Ancient Rome for families: 10 fun and interesting facts to know

With its over 2000 years of history, Rome is still…