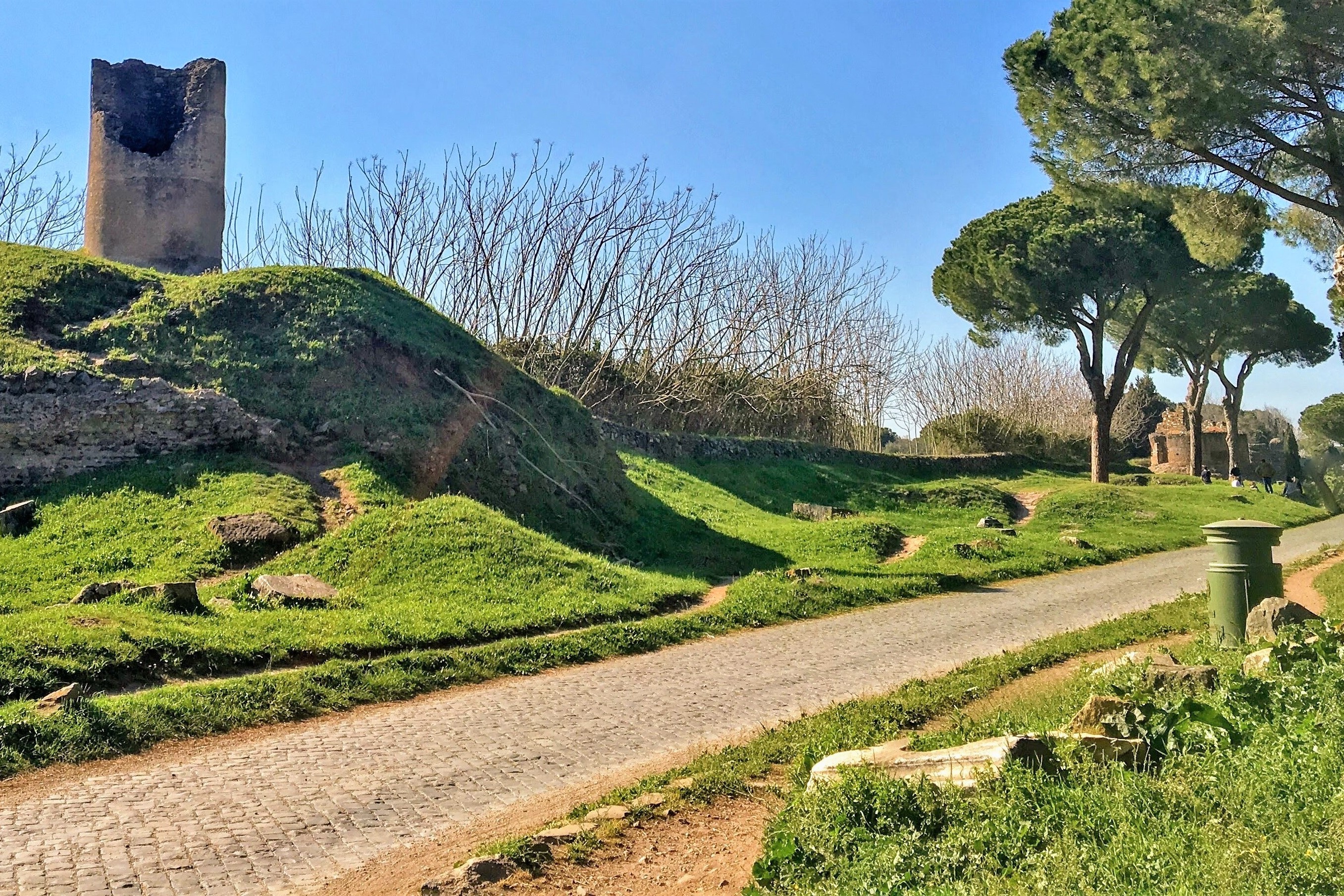 Once the most important artery connecting Ancient Rome to the Port of Brindisi, one of the Roman Empire major strategic hubs, the Appian Way still exists. Nowadays, it’s part of Italy’s largest natural-archaeological park and the centerpiece of one of our greatest Rome family tours.

Our Appian Way Tour in Rome is a highly recommended walking tour for both nature lovers and history buffs. While walking on this ancient road, one of the oldest still-existing highways in the Western world, visitors can enjoy beautiful natural scenery as well as numerous historic sites.

Below, we’ve highlighted five of the top attractions on our Appian Way Tour in Rome.

In addition to other major landmarks in the Eternal City, such as the Colosseum, Roman Forum, Circus Maximus and Trajan’s Market, the Appian Way is an essential place to visit to get a deeper understanding of the beauty and power of the Roman Empire. It’ll also give travelers an insight into the day-to-day lives of Ancient Romans.

The magnificent Porta San Sebastiano is the largest ancient gate passing through Rome’s majestic Aurelian Walls. It’s also one of the city’s best-preserved Ancient Roman gates into the city.

Originally called the Porta Appia, this enormous gate used to be one of the most important checkpoints on the Appian Way, both for traffic in and out of the city. Porta San Sebastiano nowadays houses a beautiful Museum about the history of ancient Rome’s Walls.

While walking away from the Porta Sebastiano on the historic Appian Way, you’ll pass various historic sites and monuments. One of the most significant landmarks on our Appian Way Tour in Rome is the Church of Domine Quo Vadis.

Situated about 800 meters to the south of the Porta Sebastiano, this small 17th-century church stands at the location where the historic Appian Way (Via Appia Antica) and Via Ardeatina split up.

The site has been an important religious sanctuary for well over 1,000 years. This is, after all, the very place where Jesus met St. Peter who was fleeing from persecution in Rome. According to the legend, when both men met, Peter asked Jesus “Lord, where are you going?” In Latin, this is “Domine, quo vadis?”, hence the name of the present-day church.

3. Villa and Circus of Maxentius

Another major highlight on our Appian Way Tour is the Villa and Circus of Maxentius.

Constructed by Roman Emperor Maxentius in the early-4th century, this ancient structure is one of the largest and best preserved of its kind in Rome. Only the one and only Circus Maximus is larger!

Today, tour participants can see the remains of what looks like a tower and sections of walls. The large grassy area is where the circus once stood, offering a sense of the sheer size of the building.

A short walk further along the Appian Way lies the Tomb of Cecilia Metella, a huge mausoleum and one of the top attractions in Appian Way Regional Park. It stands at the three mile marker of the Appian Way.

Dating from the 1st century B.C., it was erected as the final resting place of Cecilia Metalla, the daughter of a renowned consul. It’s one of the most popular Ancient Roman sites in this part of the city.

One of the largest catacombs in Rome, the Catacombs of Saint Callixtus are one of the absolute highlights on our Appian Way Tour in Rome. Part of an enormous ancient burial complex, these catacombs go as deep underground as five levels and consist of approximately 20 kilometers of passageways.

It’s most notable as the site of the Crypt of the Popes, an important funerary place that once held the tombs of several 2nd- to 4th-century popes. Additionally, as the former official cemetery of the Church of Rome, this is the final resting place of no fewer than 500,000 Christians, including numerous martyrs.

As you can see, a family tour of the Appian Way in Rome is a fascinating way to spend a few hours in the Italian capital. Contact us for a personalized quote!

| Click here for more information about our Rome Family Tours! |

Things to do in Rome with Kids: the Ultimate Parents’ Guide

Fun things to do in Rome with kids: 6 good reasons to book family walking tours

Are you going to stay in Rome with your family,…