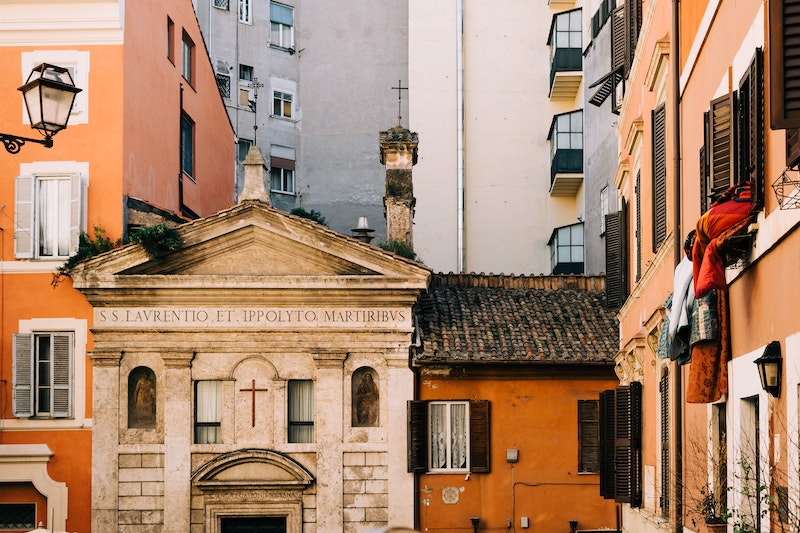 Rome walking food tour to Rione Monti will lead you through narrow cobblestone alleys, artisans’ stores, art galleries, small squares and old buildings. Rione Monti is a city within a city. Wandering through this neighborhood, getting lost and sitting at the café, a trattoria or a wine bar is one-life-time experience.

Where does this atmosphere come from?

The Monti district is the oldest in the city. Its name is linked to the three of the seven hills of Rome included within its boundaries: Esquilino, Viminale and part of Quirinale. According to the tradition here Rome was founded. Today it is the largest district in the capital and is very hilly indeed, with streets and stairways going up and down everywhere. The three hills stand out on the district coat of arms, a reminder for the name etymology.

Monti is a historical district, with similar features to Trastevere but more central and better connected (it lies halfway between Termini station and the Fori). It was the “Suburra” of Ancient Rome, i.e.a poor and dangerous district of the city, where the working class lived and often associated with gambling and prostitution.

The area was rather neglected and run-down in the postwar period until the 1990s. In the last 20-30 years, the district has been thriving, becoming one of the most picturesque and vital neighborhoods.

This area is to be experienced from its culinary point of view: the are teems with trattorias, bars and clubs. On a Rome walking food tour to Monte Rioni you will be spoiled for choice!

Which are the best trattorias during your Rome walking food tour?

YouLocalRome was born in this district, it’s “home advantage”! 😉

In the meantime, you may like: Best Trattorias in Rome

Dine like a Roman with the best Rome Food Tour

Cacio e pepe, carbonara, saltimbocca. As soon as we utter…

The Ultimate Foodie’s Guide to Food Tours in Rome

Looking for Rome food tours? One of the culinary capitals…

The Rome food tour Jewish Ghetto will lead you through…